A visit to Wat Chalong 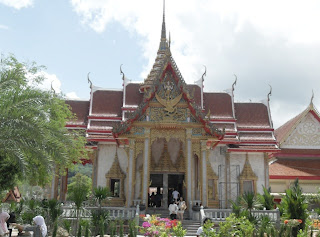 Wat Chalong is the biggest temple in Phuket Town. I recently took some guests to visit it. We took the scenic route along the costal road where we could see Big Buddah in the distance and at other points could see the tide splash against the road.

When we arrived Wat Chalong was quiet and milling with people UNTIL BANG BANG…….. there were some firecrackers lit and although they were lit inside a honeycomb of bricks it was loud and it was a shock – have a look.

After this shock we visited the main temple. We purchased some temple packs that contained; three incense sticks, 2 candles, a lotus blossom and some gold leaf. We then respectfully did the following:
1: Candles were lit and placed outside - showing respect to the Buddhist doctrine and teaching
2: Shoes were removed – to show respect to the sacred ground that we were entering
3: Lotus flowers were placed in the monk bowls – the lotus is a revered flower in Buddhist culture because even though it grows in mud it can be perfect when it is grown.
4: We carefully sat down and held our offerings in front of us, formed a wai, and made a wish. We watched some people shake containers with sticks in until a stick fell out - this stick would mean something to them – usually an answer to a wish.
5: Three joss sticks were lit - this symbolises the Lord Buddha's wisdom, the second his purity, and the third his kindness. I did find out that you should not blow your joss stick out but wave them in the air – however in my readings I could not find a reason……….please send me your ideas.
6: Gold leaf is carefully peeled from the paper and placed on a Buddha image – this is to pay respect his teachings.
7: We politely made a wai to the images and left the temple.
We walked around the temple grounds sampling the food, the fresh coconuts and enjoyed the ambiance – maybe I should begin to practise Buddhism? 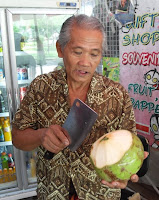 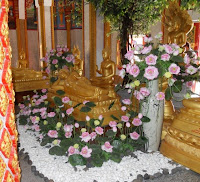 Click here for more photographs of the temple.
View Buddhist Temples in Phuket in a larger map
0 comments